Guests coming to our walking tour of Communism in Bucharest are often intrigued by the way the city looks, and often ask me a flurry of questions. My answer, in most cases is:

“Well, that’s because of Communism”.

Let me provide more detail below to the frequently asked questions:

1. Why are there so many cars in Bucharest?

This is occasionally followed by the questions: Why does everybody park on the sidewalk?

Well, that’s because of Communism!

Under Communist dictator Nicolae Ceausescu, goods came to be rationed for Romanian citizens, in an attempt to pay off the external debt of the country. Just to be clear: Romania was producing a lot of almost everything, and the Communist Party often set unrealistic production targets for different industries. However, the majority of the goods manufactured here were exported in order to get cash, and pay back debt. Dacia, our national car and pretty much the only brand available locally (with the exception of Oltcit and Lada, perhaps), fell under the same rule: most cars went to export, which meant that regular Romanians who wanted to buy one, had to register on a  waiting list (we’ve written about it before). The wait could easily reach 5-7 years. Even when finally receiving their car, Romanians could not pick its color and could not even drive it freely, because there was also a shortage of gas. Hence, Romanians’ obsession and fascination with cars.

As always, periods when there is a shortage of anything are followed by periods when there will be an excess of the same thing, to balance things out. Once the Communist regime collapse and the average Romanian citizen had enough purchasing power to afford even the cheapest car available, the city’s streets started being overwhelmed by thousands and thousands of cars (many of them imported as second-hand goods from other countries). The car is still largely seen as a status symbol in Bucharest, and most Romanians dream of owning one at some point in their lives, even if they need it or not. Some statistics estimate that roughly 10% of all cars in the city are used less than once a year, but this doesn’t matter to those who own them, as long as they can brag to their friends that they are car owners.

This also explains why some of the cars are really fancy and expensive, often exceeding the price of the house or apartment where their owners live. You’ll often see $100k BMW’s, Audi’s or Mercedeses parked in neighborhoods that otherwise look scroungy.

2. Why is there so much graffiti in the city?

Well, that’s because of Communism (not solely, but still…)

Under the Communist dictatorship, the concept of public space was essentially abolished. Public squares or streets where citizens would normally meet their neighbors or friends and discuss ideas were now under the grip of official propaganda, which allowed only forms of expressions that were approved by the Communist Party. Gathering in large groups in public spaces or even freely discussing ideas would get people under the scrutiny of the much-feared Securitate (the former secret police). As such, scribbling something on a wall or even daring to express anything artistic without the approval of the all-mighty Party was the equivalent of a death sentence. 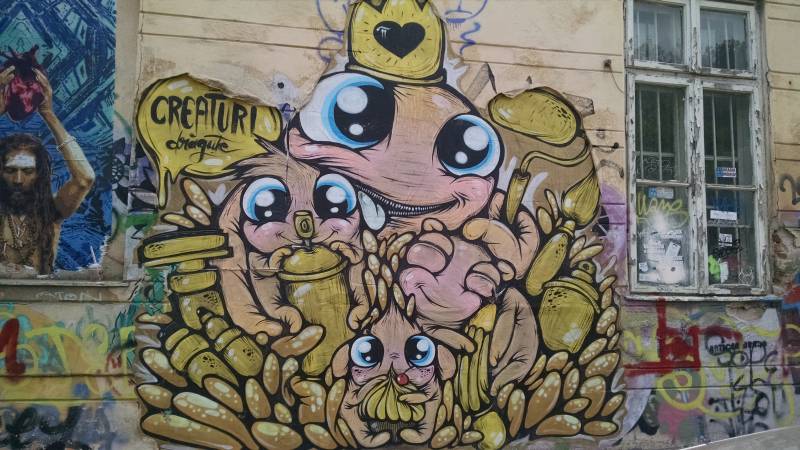 After the fall of Communism, vast spaces in the city became free from political control and in many cases quite literally abandoned. Suddenly, the city became a huge, empty canvas where any rebel teenager with a paint spray can could freely scribble anything, with very little interference from the police. Today, graffiti is omnipresent in Bucharest: you see it on the outside and inside or buses, trams, or trains, on walls of former factories, historic monuments, statues, on rooftops of buildings, on cars or even on sidewalks. To be fair, most of it is just vandalism, and the police does very little to enforce the legislation, but some of it is really creative and even legal.

This one is perhaps a bit more difficult to spot, but signs of it are everywhere: “customized” or “personalized” balconies, high fences or walls, or people fighting to protect their parking spot (even in cases when this is not really “theirs”).

As you may know, Communism abolished almost all forms of private property. With the exception of the party leaders, people were not allowed to own more than the average that was considered sufficient and necessary by party officials, which usually translated into 8 square-meters of owned or rented living space for each family member. Anything more than that could raise suspicion from authorities and could get people labeled as “exploiters of the working class”.

Once Communism collapsed, the story repeated itself: people who were deprived of property rights for many years wanted to not only own as much as they could, but also make it very clear to the others that it’s THEIR property, and nobody else should interfere with it. Probably the first thing that Romanians do when they buy a house or land is to build a big fence around it and put a “Private Property” sign on it. In the case of apartments, they will often redecorate them to their own taste, often interfering with urban planning laws, simply because now it’s THEIR apartment, so they might as well paint it pink, if they wanted to. This is why many of the buildings in Bucharest, which used to look like this:

4. Why does everything seem to fall apart in Bucharest?

Well, it’s because of Communism, or more specifically, the general lack of personal accountability that it created.

Whenever something bad happens in Bucharest, or Romania, the average Romanian’s response is that it was somebody else’s fault. People will throw garbage on the street, and then complain that the city mayor doesn’t keep the streets clean. People will break traffic rules, and then complain that traffic is chaotic. Even when you confront them and ask them who is responsible for the situation, most Romanians will shrug their shoulders, and give you a blank look: it’s not their fault, somebody else should fix this.

Why is this? Because the concept of “personal accountability” has been perverted by the Communist idea of “shared responsibility”. “Everything belonged to the people”, preached the Communist Party. There was no notion of individual, personal interest or personal initiative, as the Party (an abstract notion) ruled over everything, including very private aspects of daily life, such as sex or reproduction. Hence, a particular person could not be made responsible for any given situation, good or bad. Individual will was dissolved into the great, abstract and almighty power of the Party (technically speaking, a handful of individuals controlled by a dictator).

Fast-forward 27 years, Romanians will still point fingers at each other, often trying to find an abstract scapegoat for anything that runs badly in their country.

Which leads us to the last item on this list:

5. Does Romania still have an authoritarian political regime?

No, but there is a general perception among the population that the state should fix nearly every problem.

The communist mantra of “the Party above all”, and the ever-increasing, encroaching Communist bureaucracy lead to a general belief that the citizen should not really decide for himself or herself. The Party can make those decisions, as the Party knows better. Hundreds of thousands of Romanians were raised to believe that the “state” should decide where and what they will study, what jobs they will have (but more importantly, what jobs they are NOT allowed to have), where they will live, and even how many children they should have.

As a result, even after almost 30 years of capitalism, a certain segment of the population still thinks that the state is responsible for providing jobs, feeding them, or sheltering them. Volunteering in Romania is seen as a suspicious activity, financed by foreign NGOs and reserved only for teenagers without a lot of professional experience. Taking matters into your own hands is often derided. Solving a problem by yourself or believing in a cause is mocked or even discouraged. These are seen as matters to be solved by the all-mighty state.

Enjoyed this article? Listen to more Communist stories and see Bucharest’s landmarks in one of our upcoming walking tours!

Chuck Norris vs Communism: How VHS tapes provided an escape from official propaganda for thousands o

A short documentary about what television and entertainment meant in Communist Romania, and how illegal VHS tapes were being watched by thousands of Romanians (via New York Times). Enjoy! VHS vs. Comm

Is Communism still a taboo topic in Romania?

Part of the promotion activities for the Tour of Communism involves partnering with hotels and souvenir shops to help spread the word to tourists visiting the country. Usually, all they have to do is